Scott is a 1981 graduate of Janesville Parker High School. He was born and raised in Janesville, with his family working at General Motors. Scott received his undergraduate degree from the University of Wisconsin-Oshkosh and earned his law degree from Marquette University in 1988. He practiced law for about 10 years with other firms in Wisconsin before returning to his hometown to establish his current law practice.

Scott believes in giving back to the community by supporting youth sports and charitable organizations. He has enjoyed returning to his hometown and is appreciative of being able to provide cost-effective legal services to area clients. 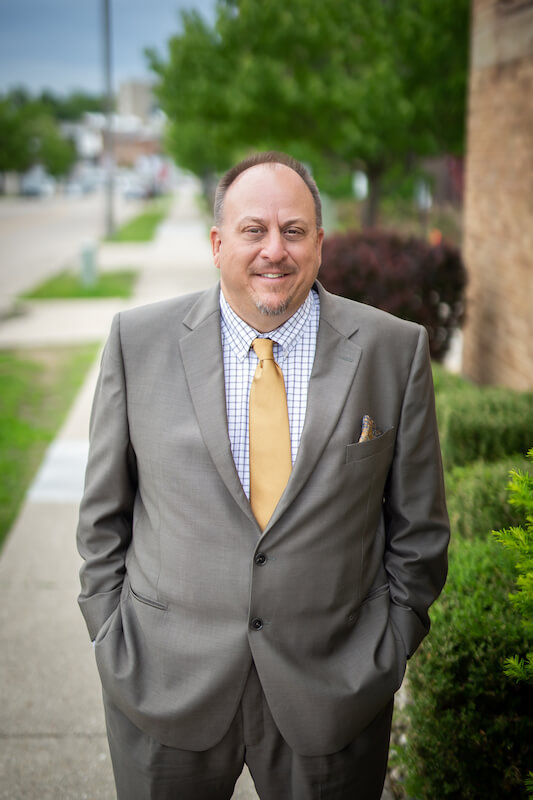 E-mail Scott at scott@scottschroederlaw.com
Why did you want to go to law school?
I went to law school because I wanted to make a difference in the world and change the world for the better.
How has being an associate attorney shaped your career?

I learned a great deal first as an intern then as an associate.  I worked for law firms all three years of law school because I did not have any money.  I did not have extensive access to the  attorneys, but I learned more from the legal assistants and staff than I did from the attorneys.  I also learned to be humble and treat the staff as equals.

As an associate, I worked in small firms where there was no formal training or policy.  It was baptism by fire,“there are 50 files, you figure it out.”  I learned a great deal from my mentors, Linda Vanden Heuvel and Dan Dineen in Milwaukee; and then Lincoln and Cindy Murphy, and David Paulson in Racine who were unbelievably supportive.

Why did you move to Janesville?
In 1999, my wife Shelly and I moved our young family from Racine to Janesville to be closer to our family in our hometown. We knew that Janesville was a great place to raise kids. I started in a one-room office with a phone, desk, computer and printer in the Olde Town Mall. The only lawyers that I knew in Janesville were the O’Learys. I had to break into the Janesville lawyers’ circle of trust.